Immigrant Friendly, immigrant proud; our towns are doing it. Come listen how Chicago is too ! 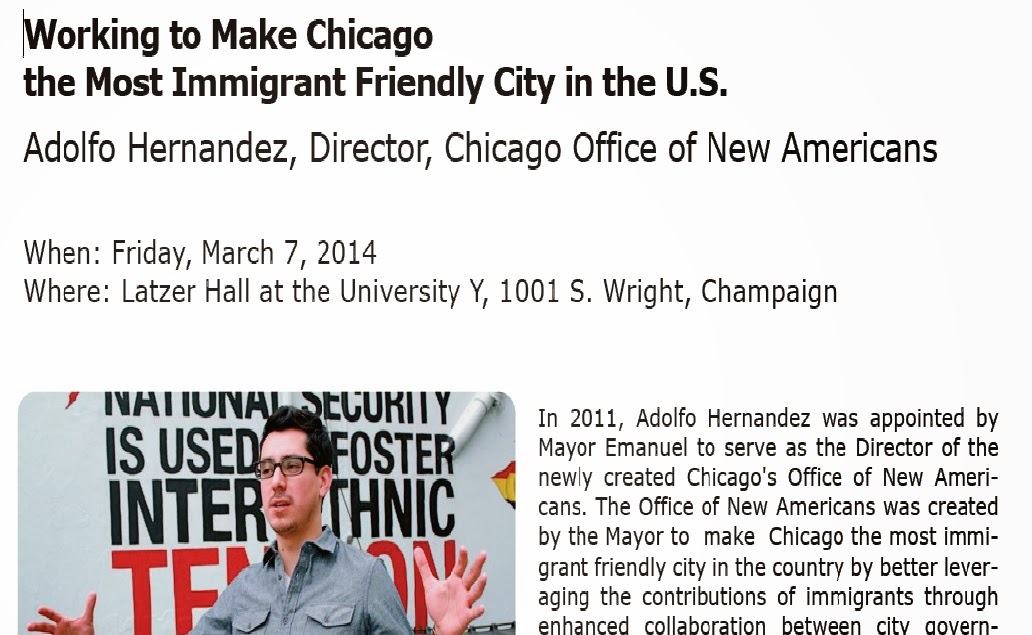 Working to Make Chicago the Most Immigrant Friendly City in the U.S.
Adolfo Hernandez, Director, Chicago Office of New Americans
When: Friday, March 7, 2014
Where: Latzer Hall at the University Y, 1001 S. Wright, Champaign

In 2011, Adolfo Hernandez was appointed by
Mayor Emanuel to serve as the Director of the newly created Chicago's Office of New Americans.
The Office of New Americans was created by the Mayor to make Chicago the most immigrant
friendly city in the country by better leveraging the contributions of immigrants through
enhanced collaboration between city government, community organizations, academic and
faith based institutions, and the private sector.Hernandez, who is the son of Mexican immigrants
and was born and raised in Chicago's Little Village community, has worked to develop
and implement policies and strategies that support the creation and expansion of immigrant-
owned businesses, that develop, attract, and retain talent and expertise from other countries,
and that bolster Chicago's status as a vibrant and welcoming international city.
In September of 2013, the White House recognized Adolfo for his work in Chicago as one of
ten local heroes who are "Champions of Change" and that work tirelessly to effectively
integrate immigrants civically, linguistically, and socially into the fabric of their neighborhoods by
bringing all residents together to create welcoming communities.

Sometimes, the only help we can give is money?...